Planetary Symbols and Their Astrological Meanings You Never Knew

As per astrology, celestial bodies have a strong influence on our lives. Our feelings, traits, circumstances, conditions, wealth, success, sorrow, marriage, etc., all can be impacted by the movement of the planets.

As per astrology, celestial bodies have a strong influence on our lives. Our feelings, traits, circumstances, conditions, wealth, success, sorrow, marriage, etc., all can be impacted by the movement of the planets. 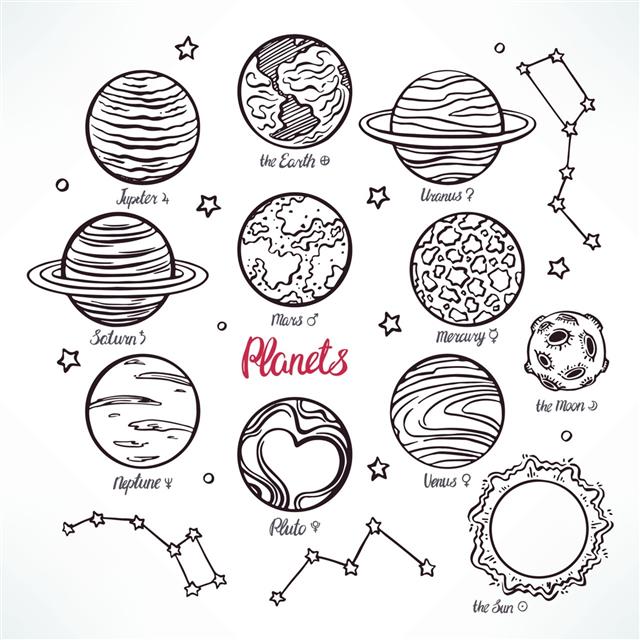 Traditional Vedic astrology does not consider Uranus, Neptune, and Pluto as a part of planets for astrological study. On the other hand, even after Pluto’s name was officially removed from the list of planets, and considered as a ‘dwarf planet’, it has still retained in astrology.

Astrology believes that celestial bodies and their movements impact the lives of living beings inhabiting Earth. It is based on various parameters, analysis, and judgments. Astrologers believe that the planets have an impact on our thinking, attitude, circumstance, etc. Every culture, of course, has its own science of astrology. However, it should be noted that, there is a difference in the planets as per our solar system and as per astrology. For example, for the purpose of astrology, the ‘sun’ and the ‘moon’ are considered as planets. As per astronomy, the sun is a star, and the moon is a satellite. Astronomical symbols and meanings associated with the planets is also a subject of intrigue. However, as per astrology, there are various traits that are associated with different planets, and each one rules different zodiac signs.

Planetary Symbols and their Astrological Meanings

► The Sun has utmost importance in almost every culture – be it the Hindus, the Egyptians, besides many others.
► In Vedic astrology, it is known as ‘Surya’, and it represents infinite power, and the power to give life. It also represents paternal relationships.
► The Roman God ‘Helios’ represents the Sun. The Sun symbolizes majesty, power, well-being, self, etc.
► The Sun is the ruling planet of Leo.

► The Moon has utmost importance for humans, also being a celestial body that has been visited by mankind.
► The Moon is considered to have profound association with one’s personal feelings, emotions, and desires.
► It also represents cycles, thus, is related with feminism and fertility.
► It is the ruling planet of Cancer.
► It can be associated with imagination, rhythm, and creativity.

► There are a lot of lunar deities. In Vedic astrology, it is known as ‘Chandra’. There are specific rituals observed by the Hindus on Full Moon day (Poornima) and New Moon day (Amavasya), respectively.
► The Roman Goddess ‘Diana’ represents the Moon.

► Mercury is represented as the winged messenger Roman God.
► This planet is known for its quick wit and communication. It may indicate the art of expression.
► In Vedic astrology, it is referred as ‘Budha’. It represents cleverness, wit, intelligence, and speech. Due to these traits, they can be observed in the horoscopes of writers, sellers, travelers, and others in the field of communication.
► It is the ruling planet of Virgo.

► In Vedic astrology, Venus is known as ‘Shukra’, and represents flowers, love, affection, beauty, sex, sensuality, aesthetics, art, etc. It also represents the pleasures of married life, besides material pleasures.
► Venus is the Roman Goddess of Love and Beauty. This planet mainly dominates our romantic life, and the various passions of our life.
► Venus rules over Libra and Taurus.

► In Vedic astrology, Jupiter is known as ‘Guru’ or ‘Brahaspati’. It is the planet of luck. It represents wisdom, wealth, benevolence, and success. Those who have a well-positioned Jupiter in their horoscope usually tend to attain great heights with their wisdom and deeds.
► In Roman culture, Jupiter is the King of all Gods. It is the ruling planet of Sagittarius and Pisces. It represents generosity, knowledge, luck, and growth.

► Mars represents fiery passion, growth, ambition, energy, combat, courage, violence, sexual desire, etc.
► In Vedic mythology, it is known as ‘Mangala’. It is considered malefic in some cases, and a ‘manglik-dosha’ is said to impact and create hurdles in marriage. A good position of Mars is said to give the person abundance of prosperity, energy, etc. However, its negative traits can be bad temper, violence, and the like.

► Personnel from the military background usually have a strong influence of Mars.
► Mars is the ruling planet of Aries and Scorpio.

► In Vedic astrology, Saturn represents justice and a wise teacher. It rewards good deeds, and punishes the bad ones. It is said that a bad positioning of Saturn brings misfortune and sufferings to that person. Saturn passes through every person’s life, where he is put constantly to test and suffering. This phase is to teach the person discipline, and the power to face challenges.

► In Roman culture, Saturn is closely associated with ‘Cronus’. It is the ruling planet of Capricorn, and a reminder of our limits, boundaries, and responsibilities. It teaches us the importance of discipline; for example, the limits of time.

► Uranus is known as the God of the Sky, and represents individuality, freedom, and rebellion. A new technique, innovation, technology, advancement―in short, creating a paradigm shift in any field―can be said to be attributes of this planet. Of course, on the flip side, it might represent unnecessary revolt, violence, and disasters.
► Uranus is the ruling planet of Aquarius.

► Neptune is considered as the God of the Sea, and represents dreams, intuitions, illusions, and spiritualism.
► Neptune rules over Pisces.

► Though astronomers have enlisted Pluto as a dwarf planet, it still has its place in astrology, and is a planet of power that represents the cycles of birth and rebirth. It also symbolizes a deep secretive, underground part within ourselves. The Roman God Pluto (Hades) is the ruler of the underworld.
► Pluto rules over Scorpio.

The Earth is used as the point of reference, and hence, is excluded by astrologers. However, in the book ‘Earth Rise The Case for Studying and Using Earth in Astrology’, by Cynthia L.C. Wood, the author has suggested that the Earth be added in the study of horoscopes.

Note: The influence of the planets on one’s life depends and changes as per its positioning. This article is only for informative purposes, and the author does not intend to give any astrological opinion, whatsoever.